Can the secret to success be summed up in a three-letter word?

It requires some explanation as to why “yet” is such an important word, so please be patient with me.

Earlier this year, I had the honor of speaking at the National Association of Secondary School Principals (NASSP) Conference in Dallas, Texas. I was even more honored because my co-presenter was Dr. Carol Dweck, world-renowned researcher and the Lewis and Virginia Eaton Professor of Psychology at Stanford University. 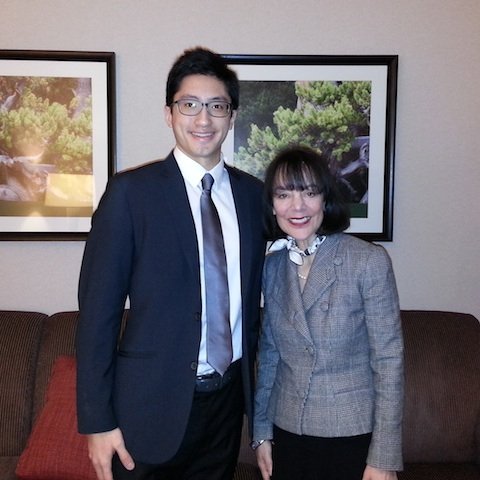 Me and Dr. Carol Dweck

Dr. Dweck’s research has centered around the themes of human motivation and development. She’s come up with a theory of the fixed vs. growth mindset, which has been proven by numerous studies.

Why effort matters more than ability

Essentially, Dr Dweck’s theory predicts who will be successful over the long term and who won’t. I know, that’s a pretty big claim to make, but she has three decades of research to back her up.

Here’s a summary of the theory:

How can a 3-letter word make such a huge difference?

Dr. Dweck has observed that one of the things that’s characteristic of growth mindsetters is that they frequently use the word “yet.”

On the other hand, growth mindsetters simply tag on the word “yet” at the end of those sentences:

It’s a simple word that represents a fundamental shift in mindset. (You can read more examples in this article I’ve written about developing a growth mindset in students.)

Using the word “yet” reminds us that we’re not perfect, that we’re a work-in-progress. Of course, we’ll need to choose which areas we want to focus on and excel at, but we shouldn’t write ourselves off as being bad at something before we’ve even given it a shot.

I’ve worked with students who have concluded that they’re bad at math, bad at science, bad at relationships, bad at life. Worse still, they’ve decided that things will never change, so they subconsciously behave in ways to prove themselves right.

I can identify, because as a teenager I was like that too. One thing I was especially afraid of was public speaking.

Given that I’ve spoken to thousands of people in various countries, I always get the “yeah, right” look—I mean, the death stare of disbelief—when I mention that I used to have this fear. But it’s true, I promise!

In school, I used to shy away from any opportunity to speak in public: talks, asking questions in class, or sharing my views. To me, being forced to give a class presentation was the worst thing that could happen in life.

Just the thought of speaking in public immobilized me. My stomach would tighten up, my mind would freeze, and my emotions would go out of whack.

After saying yes again and again to speaking opportunities, I eventually realized that I enjoy public speaking, and I’ve never looked back since.

Becoming a “yet” man/woman

That’s my little story of how the word “yet” has empowered me.

I’m still in the process of applying this “yet” mindset. I want to become a world-class husband and father; I want to grow as a leader and strategic thinker; I want to develop traits like courage and fortitude. I’ll be the first to admit that I have plenty of work to do in these areas!

What about you? Are there skills or competencies that you’ve already decided you’ll never be able to acquire, regardless of how hard you try?

And are you willing to make it a daily habit to become a “yet” man/woman?

Life is a journey of learning, loving, growing and contributing. We’re not there. Yet.

Download my FREE e-book,
"16 Keys to Motivating Your Teenager"